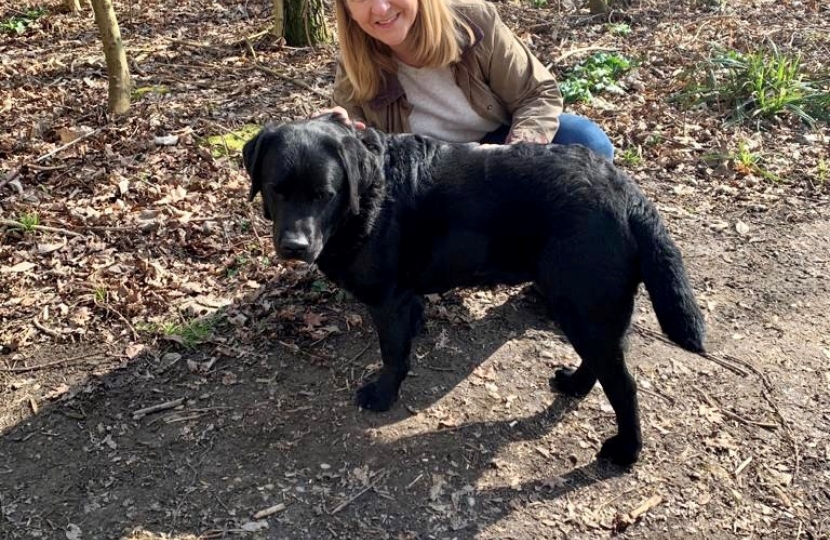 More than three-quarters of dog owners say they’re more scared of walking their pet because of the heightened risk that it’ll be stolen, according to a major new study.

124,729 people responded to the landmark online survey with an overwhelming majority saying that dog theft was a “serious problem” and thieves should face stiffer sentences.

The survey, conducted by Sussex Police & Crime Commissioner Katy Bourne in partnership with the Association of Police and Crime Commissioners, comes amid growing evidence that dogs have become a target for criminals.

Key findings from the survey:

There was also strong support for changing the law to reflect the emotional impact of having a pet stolen.

At present, dog theft is not defined as a specific crime, with dogs classed as ‘property’ under the Theft Act 1968.

If caught, the penalty for stealing pets is generally a small fine or suspended sentence, with the Pet Theft Reform campaign reporting that in recent years only 1% of dog theft crimes have led to a prosecution.

According to the survey, 87% said that where pets provide their owner with companionship, sentencing guidelines should reflect this and disagreed that the theft of a pet should be categorised under property theft.

Dr Daniel Allen, an Animal Geographer at Keele University, who set up the Pet Theft Reform campaign with the Stolen and Missing Pets Alliance in 2018, said: “The number of survey responses shows the extent to which the public are concerned about dog theft crime. Further research is needed to build the ‘evidence base’ and inform the response to dog theft moving forwards.”

The Home Secretary has said in recent media interviews that she will review pet theft, with potentially tougher penalties for perpetrators.

The survey, the largest ever conducted by PCCs, will be used to help shape police recording and response to dog theft and could also influence how the crime is defined.

About a third of respondents said they would like their local police force to take dog theft more seriously, rating them as poor at responding to their concerns; 48% said they didn’t know how effective their local force was in this area.

Sussex Police & Crime Commissioner Katy Bourne said: “Police forces across the country need a ‘flag’ for reports of dog theft on their systems as currently it is extremely difficult to track this crime trend and put in place an appropriate police response

“I will be speaking with my Chief Constable about how we can use this data to inform future enforcement and preventative measures that we put in place.”

In Sussex, under the newly introduced dedicated police response to pet theft, Operation Collar, all future reports made to Sussex Police about pet theft will be tagged and tracked.

PCC Bourne adds: “I would like to thank everybody who took part in this unique survey which elicited such a huge public response. Pets are part of people’s family and the devastating emotional impact of this crime should no longer be overlooked.

“There is a clear message that police forces need to communicate better with the public on this issue. Public perception and fear have increased massively, so much so that nearly 83% of respondents are scared of walking their dogs at night.

“The Home Office have asked to discuss the findings and how we can develop measures that will protect people’s pets and boost public confidence. I will be exploring whether it is time to consider defining pet theft as a specific crime.”

The fear of “dognappers” is being perpetuated across social media and Facebook organisation ‘Beauty’s Legacy’, ran by Lisa Dean from Leicestershire, describes it as a growing ‘paranoia’ within the online dog owner’s community in response to the reported rise in dog theft.

Lisa works with the police and charities like Dog Lost to reunite owners with their stolen or missing pets. She has a team of volunteers across the country, even drone pilots who help in the search. She runs campaigns to find missing animals and has reunited hundreds of owners with their pets over the last five years.

She is supportive of the results of the survey and would like more consideration paid to the lasting emotional impact of these crimes. She says: “Owners are left traumatised after a pet is stolen. Their physical and mental health suffers immediately. Owners we have supported have moved to a new house, changed jobs and spent thousands of pounds on home security. They continue to live in fear and many have suffered relationship breakdowns.

“The rise in pet theft in recent weeks has been extraordinary, like nothing we have ever witnessed. As a low risk high profit crime, it is a very lucrative business and a change in law is crucial. Pet theft needs to be recognised as a crime in its own right, with the emotional impact on the victim being taken into consideration when sentencing is passed. Tougher consequences will be a much-needed deterrent. Currently thieves know that it is highly unlikely that they will even be prosecuted and if they are it will seldom carry a custodial sentence.”

Liz White, 68, from Burbage Leicestershire had her Cockapoo, Logan, stolen on the 12th February from a kennels that he was temporarily boarding in whilst she was in hospital having surgery.

The dognappers cut a hole in an electric fence that bordered the kennels and targeted Logan for his breed, as some Cockapoo puppies sell for upwards of £3,000.

She describes herself as ‘distraught’ at that time and feels very lucky to have been reunited with Logan. Lisa from Beauty’s Legacy started a campaign to find Logan and a member of the public spotted him 30 miles from the kennel. Drones were used in the search to find Logan and he was returned safely to Liz after only five days.

She says: “My Cockapoo Logan was targeted and stolen because he is classified as a valuable commodity or valuable ‘property’ that can be easily sold for criminal gains.

“He is a very timid, gentle natured dog and very much part of our family, I was beyond distraught when I learnt he had been taken because I’m aware that less than 25% of stolen dogs are even returned to their homes.

“The impact that this had on me is massive, it was tormenting wondering what Logan was experiencing and it haunts me even now. I’m very thankful for Lisa and the effort she made to find him.

“Campaigns like the ones that Beauty’s Legacy starts with the help of the police and others really puts the spotlight on the dogs that have been stolen and makes them ‘too hot for criminals to handle’.

“Logan was discarded and spotted by passers-by. This is a fantastic way to find stolen dogs but it’s not easy to track down the perpetrators.”

Holly Morgan (name changed for anonymity), 26, from Nottingham had her dog stolen in August 2019. She was also helped by Beauty’s Legacy in her search for her beloved Cocker Spaniel, Bud. Bud was found just under 130 miles away from home after being missing for 18 days.

She says: “Having my dog stolen was definitely the worst, stressful and most heart-breaking situation I have ever had to go though in my life! The sleepless nights worrying where he is if he’s okay and if we are ever going to be reunited.

“Even though I have my gorgeous boy back and my family is now whole again I am still living every day in fear that it will happen again. Even more so now with lockdown. I won’t walk my dogs by myself anymore, even in daylight as I’m so petrified that they will be stolen from me.”

This fourteen-question survey was conducted online via Survey Monkey and ran for three weeks from 19th February to 12th March. It was advertised across social media through PCC’s channels nationally, via other Government bodies, the mainstream media, Neighbourhood Watch networks and charities such as Dogs Lost also helped in the promotion. The Office of the Sussex PCC collated the results with the APCC.